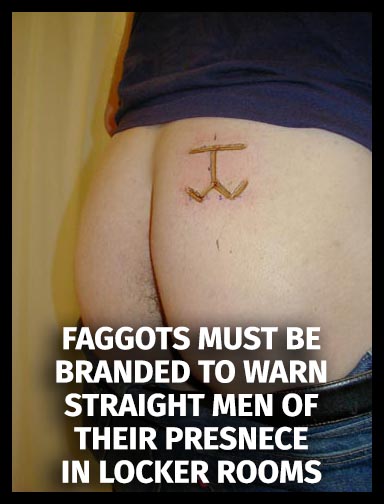 cadude writes: I am a gay man who has been in a long term relationship with another man for almost 30 years. We have had a good life together, and my husband is a passionate and intelligent man. He is strictly a bottom, but as I am bi (and also fuck women occasionally) that works well for us.

Recently, he decided to come out to me – not as gay, but as a faggot. He told me that he had started reading this site, and that what you have here spoke to him, particularly the Faggot Study Guides and the Faggot Bible. He told me that he registered with your site, and carries a faggot registration card in his wallet.  He also said he can no longer be my husband, but he is willing to stay and be my faggot slave. He also said that I need to stop referring to him as “he” and start using the pronoun “it” when talking about it. When I started treating it the way it wanted to be treated, it started worshipping me, and it believes me to be its owner and its god.

I now have a regular girlfriend, and when she comes over, my slave stays in the basement, where I tie it to a sawhorse and stick a tube in its mouth. The tube leads to a funnel in the closet of my bedroom (it used to be our bedroom until the faggot started needing to be locked in a cage in the basement). After I fuck my girlfriend, she goes to use the bathroom, and I step into the closet and use the funnel as a urinal.

I also beat and rape my slave, and whore it out. I have a gloryhole set up where men can stop by and use it. it gets a lot of action. I have to admit that, after having a “loving relationship” for all these years, I am having a shitload of fun with our new relationship. I can’t get enough.

Now it wants to go to the “next step”, but it says that what the next step will be is up to me. I’m a little unclear as to what to do next. It takes beatings, gets used by strangers, drinks my piss – what more should I do?

First, congratulations on figuring out what it is, and on making it into the faggot slave it deserves to be. Sounds like you are doing good work, and you need to continue.

Faggots like your slave need to have the bar raised, so they sink deeper and deeper into their own depraved faggot world. So some suggestions:

If you take these steps, trust me: you’ll end up with a true slave that will worship the fucking ground you walk on. Enjoy!